We had such a wonderful time doing our scratch performance at the Norfolk and Norwich Festival and the audience were fab – laughing, sighing, applauding and telling us their stories. Andrew Day did some filming for us which you can see here:

We had some fabulous feedback:

“That was really powerful stuff and the music was great.  I hope the production goes on to do even greater things! Such amazing people you have around you.”

“Excellent play #OUT140 Congrats @shellytellyuk & co – a triumph – you held that crowd.”

“I loved the whole thing – can imagine it being performed at Edinburgh – I think the snappy stories would keep people engaged for a longer performance and the music interspersed it really well.”

“It was amazing! Such a fantastic thing to do and the atmosphere was wonderful.”

“It was a really great show. It came off the page well….Can’t wait to see it again on Pride weekend.”

Ruski took some brilliant photos. There’s a few below but you can see the full set on Facebook by clicking here 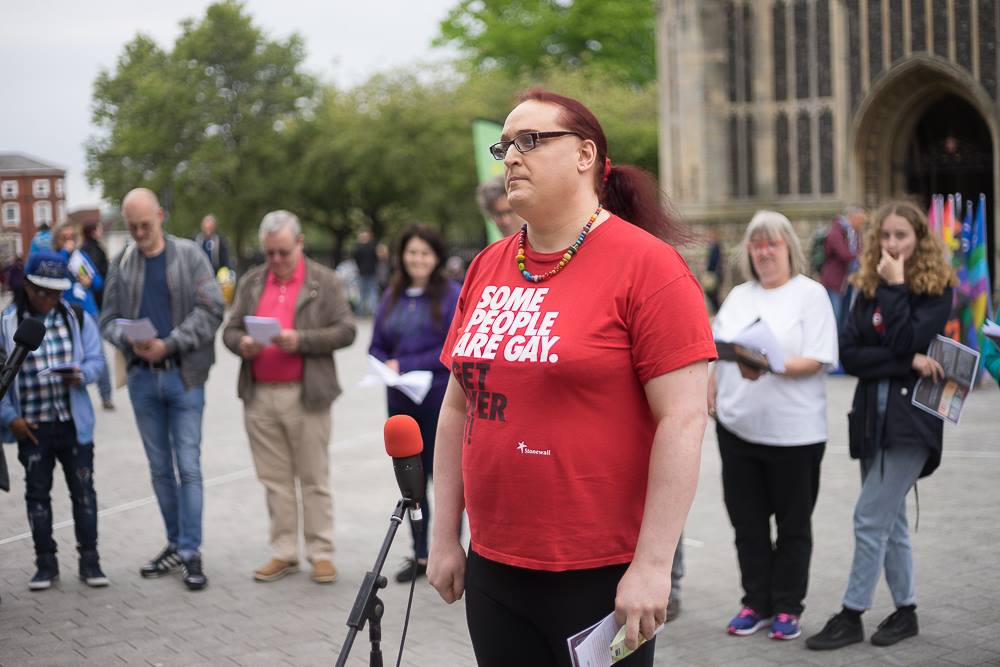 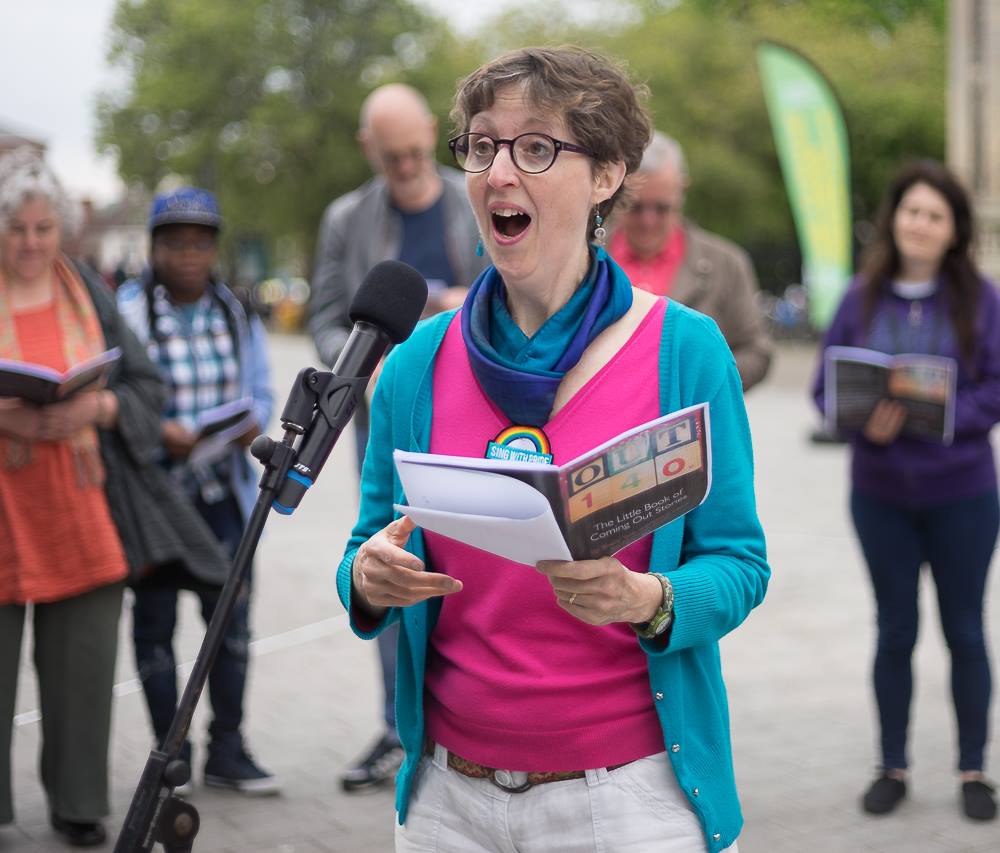 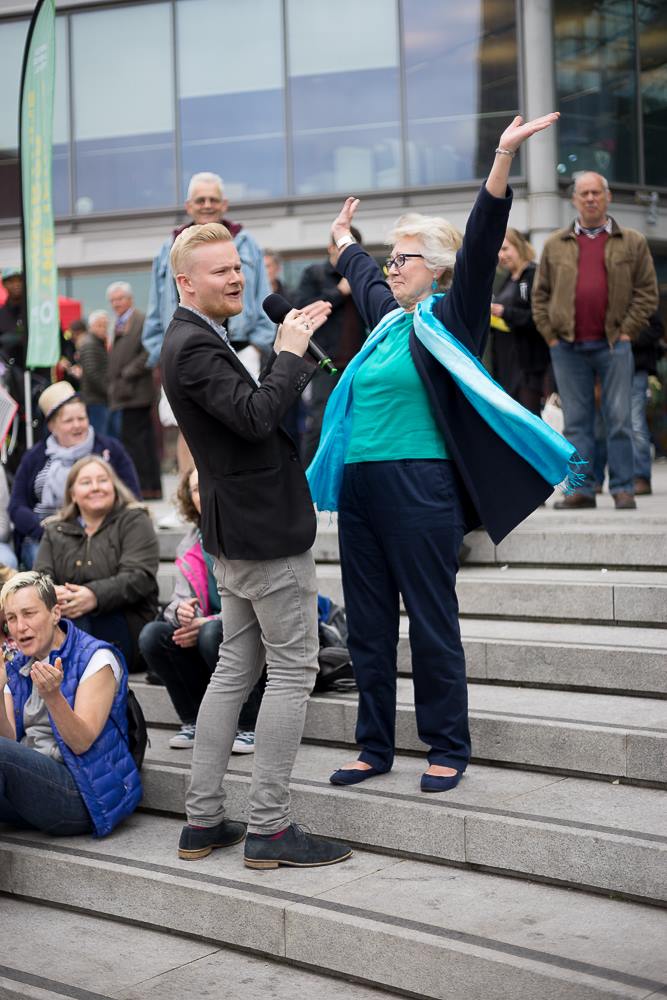 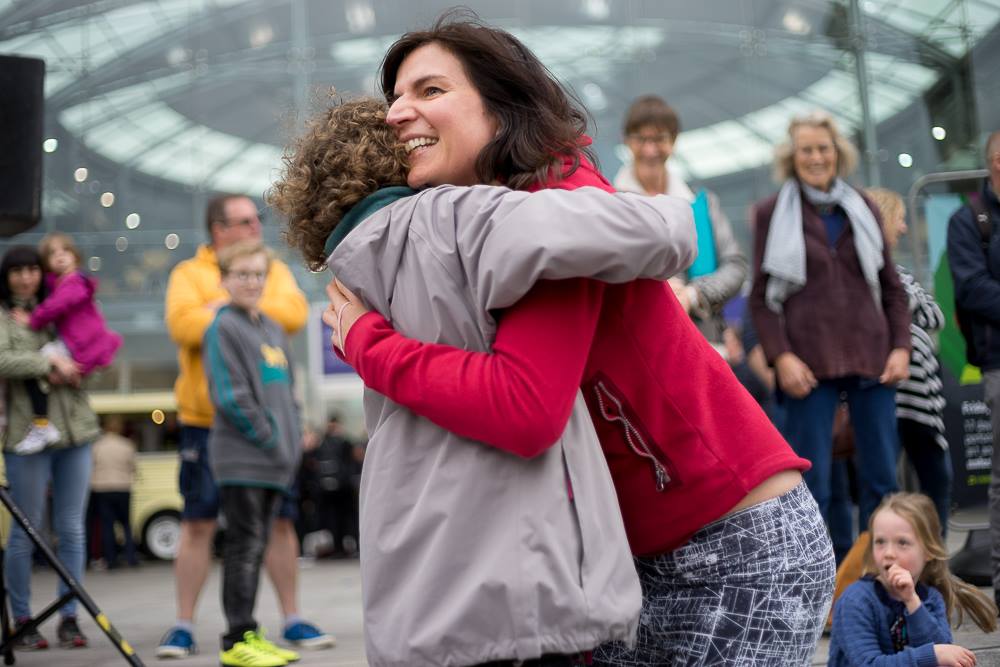 Here’s the plan for how we’re going to create the scratch performance of the play at the Norfolk and Norwich Festival:

REHEARSAL
Saturday 13th May, 11am
The Forum

PERFORMANCE
Saturday 13th May at 2pm
Norfolk and Norwich Festival: Museum of the Moon, The Forum

Please share the poster for our scratch performance on Saturday 13th May 2017. 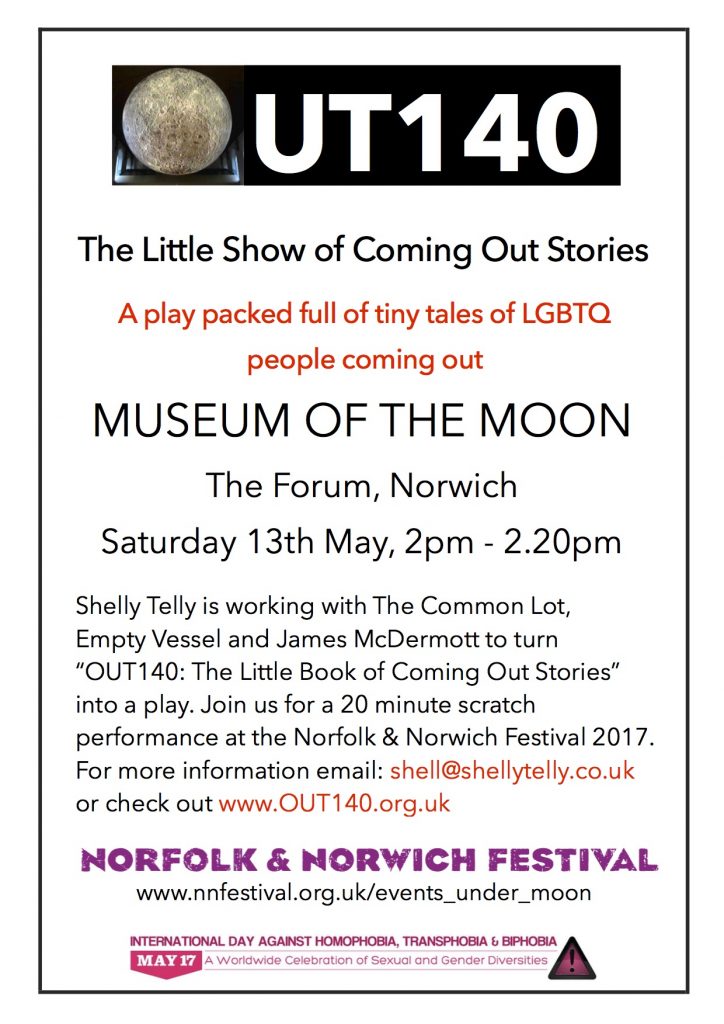 Here are some of the talented people who are helping us to turn OUT140 into a play….

Eve Pandolfi has been involved with The Common Lot for the last 3 years, and been involved in a number of different community performance projects.

“Shell originally approached me with the idea of turning the OUT140 project into performance, and I suggested the idea of workshops to allow anyone to come along and be part of a creative process. For me, the ideas along the way are as important as the finished product.”

James McDermott is an LGBTQ playwright and performer based in Norfolk. He trained at UEA where he graduated with an MA (Distinction) in Scriptwriting. His short plays have been staged at Royal Court, Lyric Hammersmith and Latitude. James is currently touring ‘Rubber Ring’, his critically acclaimed solo show about a Norfolk teenager’s struggle with sexual and regional identity. He is represented by Micheline Steinberg Associates.

“Growing up gay in Norfolk, I felt like a ghost no one believed in as Norfolk and rural LGBTQ stories were seldom seen onstage or screen. I am taking part in this project to turn Norfolk people’s coming out stories into a play in the hope that the show will help the region’s LGBTQ community feel less like ghosts as their stories are finally being represented onstage”

“My interest in the OUT140 project stemmed from the moving and inspirational book of coming out tweets, a belief in diversity and openness, and a vision that these stories would make a funny, moving and inspiring piece of live verbatim theatre. However, the importance of such a project has been clarified by recent news stories coming from Chechnya, and reinforces the importance of continuing to challenge oppression in all forms. Art and theatre offer a chance to open up debate and connect with people on a very personal level. These stories deserve to be told.”

We’re very excited that our dream of turning OUT140 into a play is finally happening! Shell is working with a load of really talented people to get OUT140 off the page and onto the stage. Here’s a poster for our first workshop which is on Monday 24th April 2017, 7.30-10pm in the Drama Room at the Sewell Park Academy, Norwich. Find out more information on our  page: Play 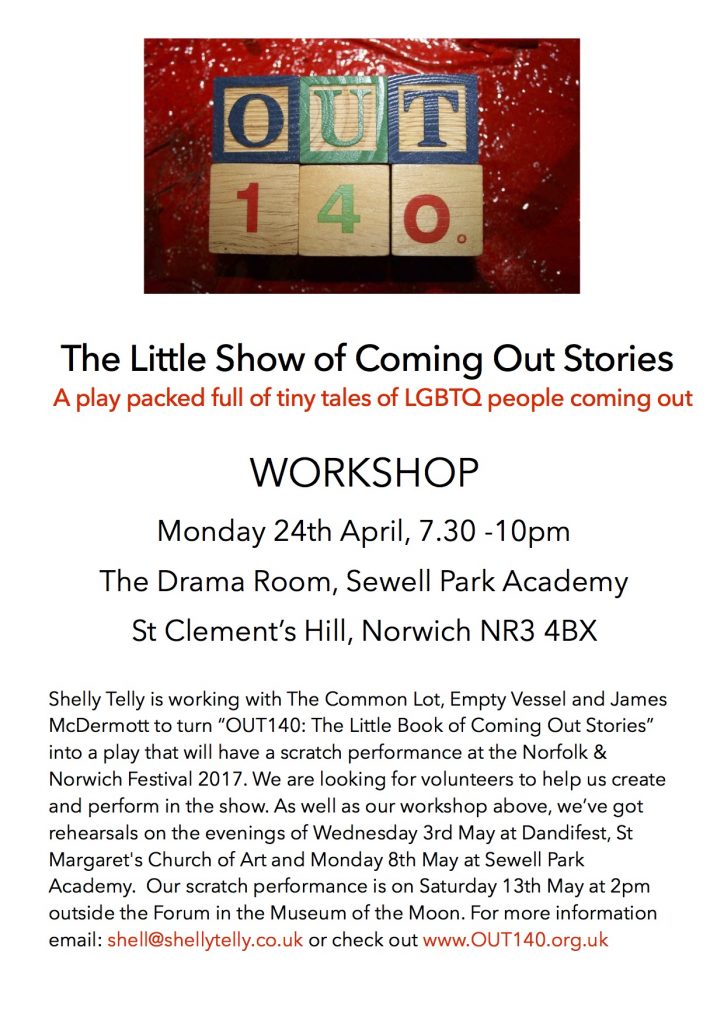 David Mills from Know Your Pride invited Shell to do a talk about OUT140 as part of  their event in the Spiegeltent at the Norfolk and Norwich Festival 2016. Shell did a call-out for people to help her turn OUT140 into a play. Eve Pandolfi from the Common Lot has offered to help and the NNF are keen to offer support and a platform at next year’s festival. 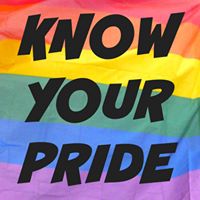 Shell had a very creative pint with actor and theatre director Dugald Ferguson who was full of ideas for how we can turn OUT140 into a play. Dugald is a British / New Zealand artist based in the UK working on solo, collaborative and commissioned pieces in the visual arts and performance. He is co-founder of the immersive Theatre Company Living Structures and Artists Collective The Norwich Dandies. Here’s what Dugald says:

“I am wildly excited about ‘OUT140: THE PLAY’, taking these honest, moving, hilarious, delectable coming out tweets and turning them in to a feast of performance. The little anecdotes are so universal and versatile in their wide appeal and human interest, easily adaptable into a wide array of performance, music, puppetry, live art, circus, installation acts which will be a totally awesome Cabaret of Coming Out! Above all the constantly growing nature of the OUT140 project with Shelly Telly – the insatiable collector of tweeted tales – means this play / event / happening can expand, evolve and respond to the ever changing landscape of LGBT human rights.” 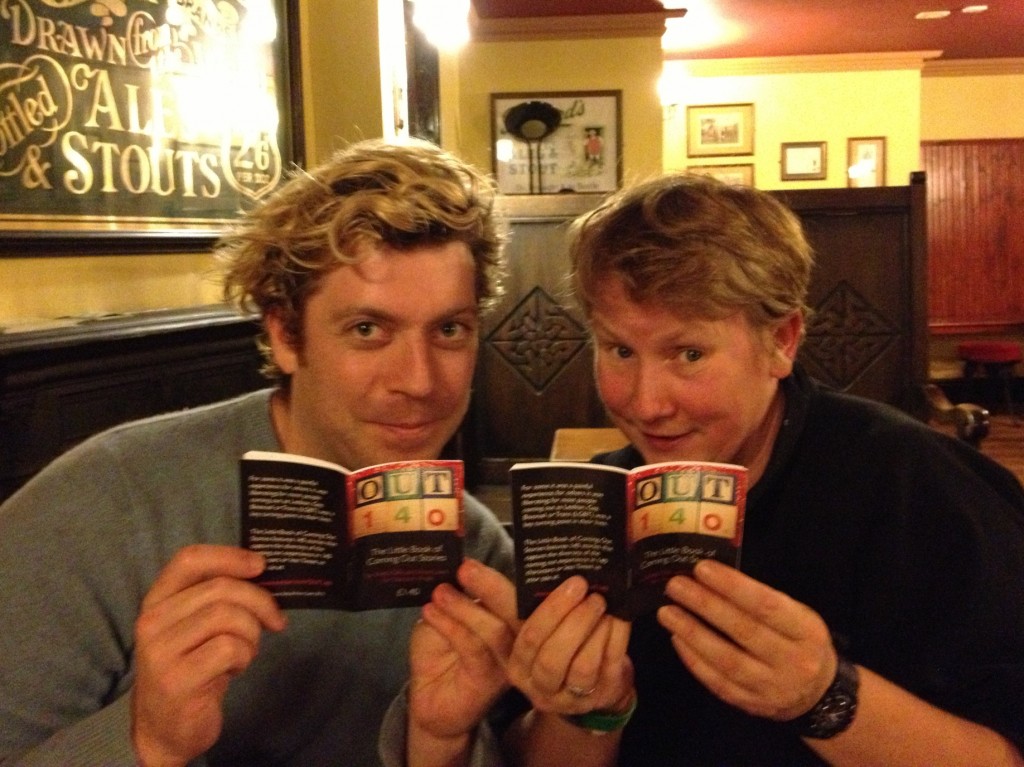 Shell used the OUT140 to train her colleagues on the Certificate in Counselling Course in LGBT awareness. 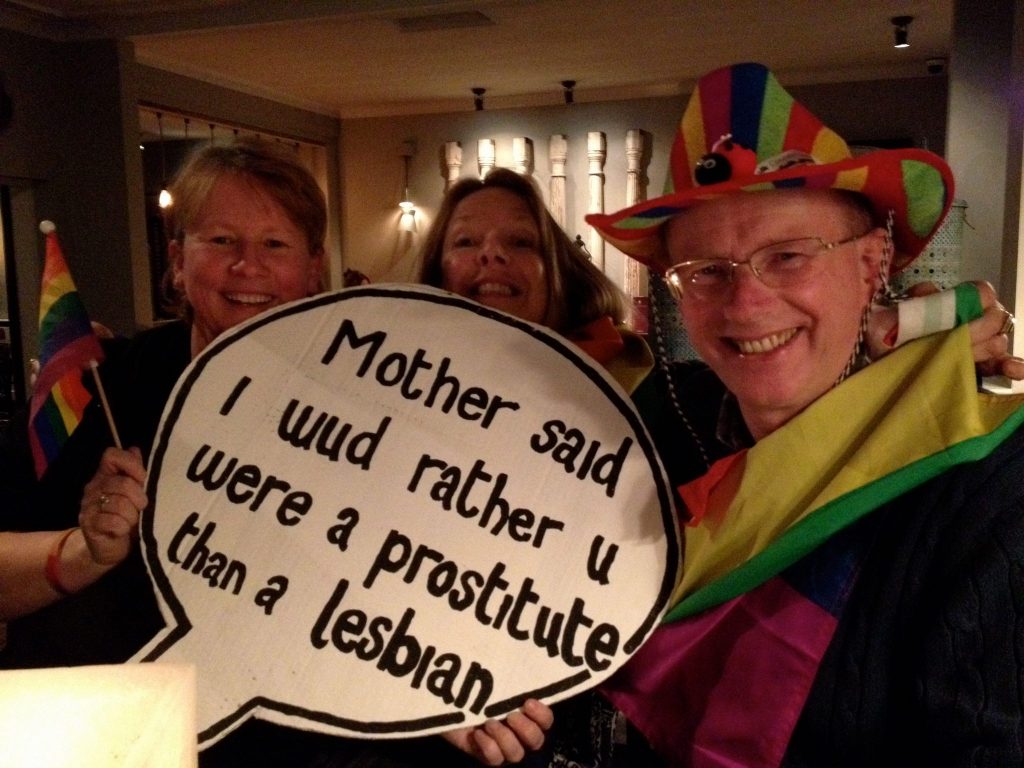 Dr BJ Epstein from the UEA School of Literature, Drama and Creative Writing used OUT140 as part of her Coming Out workshops for students and staff. She writes:

“Thank you so much for the coming-out books. We had our coming-out workshop yesterday and it was great to have the books to give people. We gave them to everyone first, and that worked so well because people could sit and read them while they were waiting to start if they didn’t feel confident having a chat with anyone. The workshop was such a success, and I was really happy that people said they felt it was useful and meaningful. Many were so grateful to have a chance to meet other LGBTQ people and to get to talk about issues regarding coming-out.” 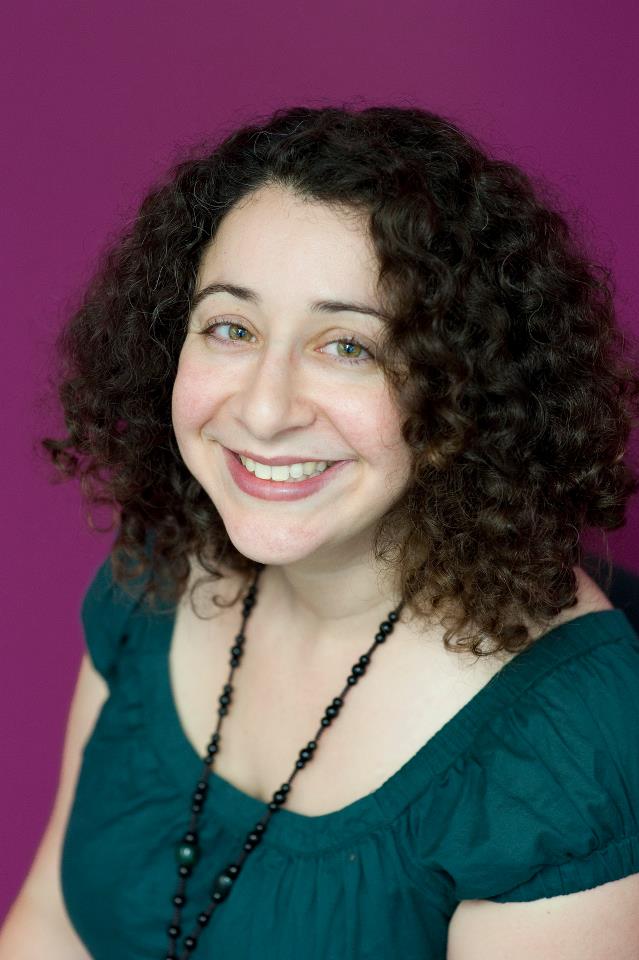 Following the success of Shell’s OUT140 workshop at booQfest, she will be back in Northampton for International Coming Out Day on 12th October 2014. Northampton Borough Council’s LGBTQ Forum and FAN Social Events Group are organising an event at Northampton Museum and Art Gallery. Opening at 1pm with a speech from Michael Ellis MP the day runs until 6.30pm, with a free buffet and drinks networking session from 4.30pm hosted by Barclaycard’s Spectrum LGBT Group. Organiser Matthew Toresen says

” One of the highlights of the day will be the involvement of the OUT 140 project from Norwich. OUT 140 ran a fascinating workshop at the booQfest literary festival recently and I’m delighted that they agreed to come back and be a part of Northampton’s first celebration of International Coming Out Day. There couldn’t be a more perfect project to be part of the day”. 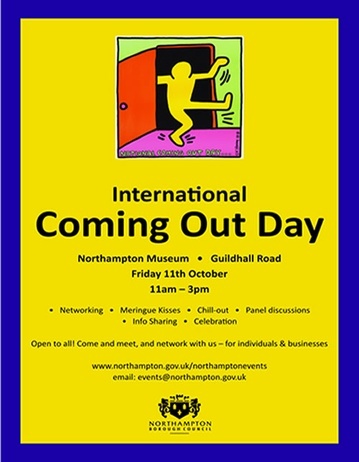