The Sing with Pride choir have turned a range of the OUT140 stories into micro-songs. Here you can see them performing a micro-opera written and directed by Mary Benefiel. It was filmed by Deanna Allison.

Sing with Pride first performed their “OUT140 Suite”  at the Hand in Hand LGBT Choirs Festival in London in July 2013, organised by the Pink Singers as part of their 30th Anniversary celebrations. Thanks to Kathleen from the Fourth Choir for this photo. 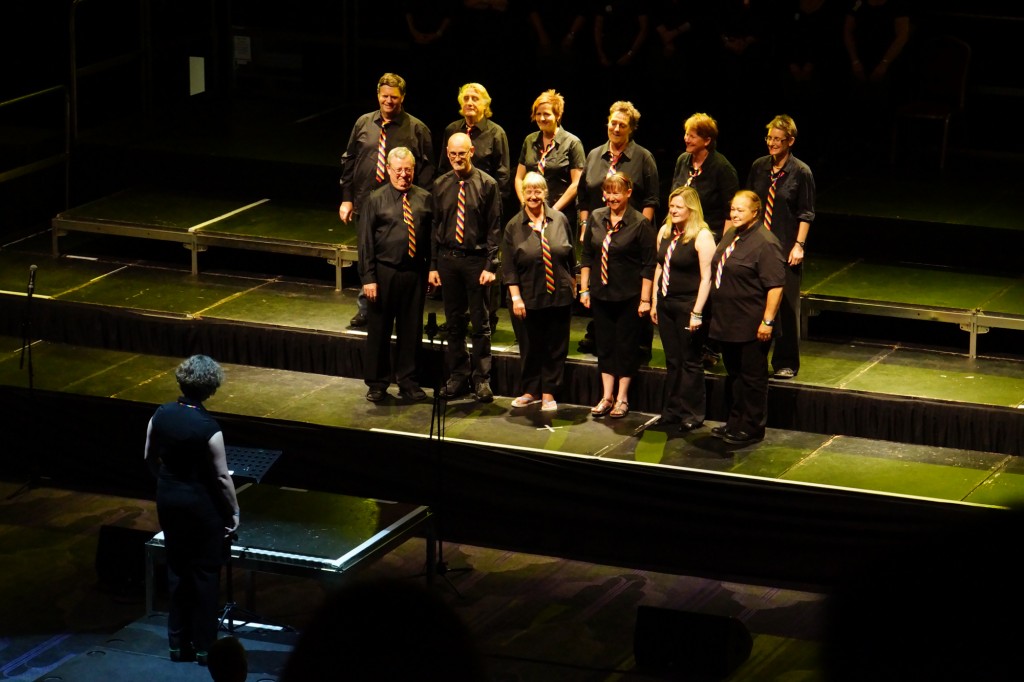 Here’s a review from John Flinders, accompanist to the Pink Singers:

“We had a wonderful day and the concert was a feast of variety from massed choirs to fledgling groups; in a way every performance was a high point, but for me, and for several of the people that I’ve talked to, one of the real standout moments was your OUT140 Suite – an inspired way of sourcing a text for a new work, a succinct, interesting and very singable musical realisation, and a witty and passionate performance. A wonderfully imaginative and creative idea, which was both incredibly personal to those who contributed texts, and yet spoke to us all and moved us, too. Thank you for sharing it with us.”

Sing with Pride have worked with a range of singer songwriters to create their OUT140 Suite. Stephanie Anderson wrote the very first OUT140 song Grandma Says.  Kimberley Moore  wrote Bisexual and Don’t Hold Your Breath. Mary Lovett  wrote I Tell Everyone I’m Gay, Irish Working Class Mother, I Had A Boyfriend and worked with Richard Emms to create I’m not Straight. Mary Benefiel wrote the Micro-Opera and I came out to my friends and my family. Mike Yarde wrote I was 18 and Queer Way. Stevie Savage wrote Tick Box. Sue Lane wrote My daughter told her granny and I’ve never come out.

Listen to Grandma Says by clicking this link

Listen to Bisexual by clicking this link

The choir had a micro-concert of songs on Thursday 25th July 2013 as part of the Norwich Pride 5th Birthday celebrations. Read all about it on the Norwich Evening News website. Photo by Steve Adams. 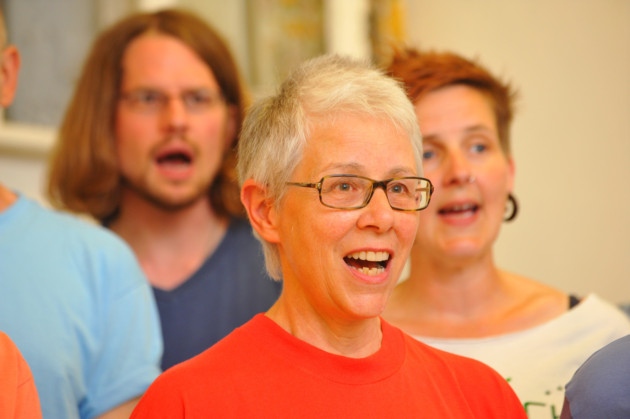 Multi-talented Maddi Cassell wrote a 12 second song called “You don’t have to wear dresses for Jesus” for the launch of the OUT140 show at Fusion in the Forum in January 2010.